Almost every business in New York is using a rollup door or a roll up door for security. Some people might wonder why the rollup gates and the roll down doors are so popular in New York, and why many business owners choose the rolling gates to protect the store. There are many reasons for that, the roll up gates are reliable, they barely take any space when they are open, they are relatively cheap, and you can choose if to make them motorized or you can choose to use them manually. In this post we would like to bring few case studies about rollup gates problems and solutions.
The case studies are not a recommendation to try and repair the rollup gate by yourself. But it can give you general idea about the way rolling gates operate, how to recognize when there is something wrong, and how to deal with a broken gate.

You might not be aware of it, but the rollups are equipped with a spring, that makes it easy to open and close the gate. There are many different types of rolling gates in NYC, and the spring is what makes them operable with minimum force.
Now, many storeowners in New York, when they find that it became tough to open their gate, assume that some greasing is going to solve all the problems. Usually when a problem appear, it remind them that it has been a while since they greased the gate. The truth is that when the spring is broken, it is probably too late for greasing as a method to repair the gate. When there is a problem, you will need to hire a local gate expert in NYC to come and repair the gate for you.
The rolling gate spring is not something that you simply buy at home depot, at the local hardware store, or online, each gate require a specific spring, which will manufacture for that specific gate, in terms of size and weight. Besides getting the spring, installing it is another problem that need to be dealt with. Replacing a spring for rollup gate is a complicated job, which require tools and knowledge that not every handyman has.
Gate repair case study: We once received a phone call from a store owner in the Meatpacking district, telling us the storefront gate broke. When we arrived, we discovered that the customer loaded the gate with grease, thinking that something the tracks will fix the problem. Just to remove the massive amount of grease and lubrication took us almost as much as replacing the broken spring took us.
Conclusion: When there is a broken part, such as a broken rolling gate spring, no amount of grease will solve the problem. The gate must be repaired, and the broken part need to be replaced.

Case study #2: The motor is not working

The majority of the rolling gates in New York are motorized. If you own a motor driven rolling gate, and it seem like the motor isn’t working, it might be an issue with the motor itself, but it is also possible that the problem comes from a different source. It could be something with the gate itself, or even electricity problem. The bottom line: Hire a qualified gate technician for the service. A qualified gate technician can check the gate, the motor, and locate the real problem.
The case study: We received a call from a warehouse in Brooklyn, telling us that they need a technician to check their rolling gate. When we got there, we were told that another company installed for them a new motor couple weeks ago, but the gate keep getting stuck. And that they decided to check with a different company. When our gate technician in Brooklyn checked the gate, he discovered that the problem is not really the motor, but that the spring is very weak. It is possible that there was no need to replace the motor in the first place.
Conclusion: Not every problem that seem like a motor problem mean that you need to replace the motor. Often, the problem come from a totally different source. 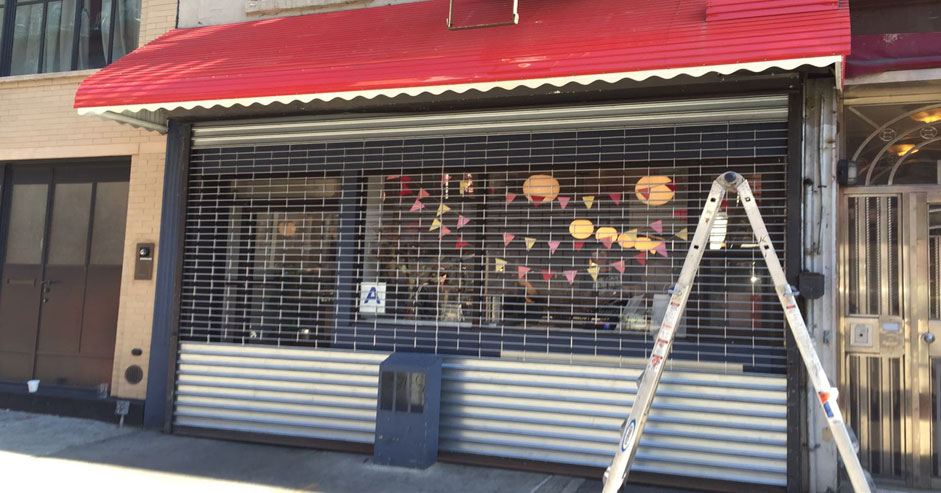 Case study #3: The gate came out of the tracks

A rolling gate that come out of the tracks is not rare, and it is one of the most common problems. The reasons that push a rolling gate out of the tracks are many, and the ways to fix off tracks gate in New York are many. The most important thing is to make sure that the gate will not be touched or operated until a rolling gate expert will come and fix the gate.
The case study: We once received a call for off tracks gate repair in Manhattan New York. When we arrived, we discovered the problem, and we quoted the repair of the gate for $295. The store owner refused, and told us that he can fix it by himself. He paid us the service fee and we left. At 2 AM, the dispatch receive a call for emergency gate repair at the same address. We sent a technician again, and what the technician saw was the whole gate completely on the floor!
They tried to repair the rolling gate without the proper tools or knowledge, and they ended with a gate that broke in a way that couldn’t be solved without completely replace the gate, the spring and the motor! Instead of paying $295, not the price will be couple thousands of dollars.
Conclusion: What might seem simple to you, can be much more complicated than it appear to be. And when the gate is off tracks, and to you it seem like all you need to do is to push it back, can end with serious damage if you choose to try and do it yourself. When the gate is off tracks, hire a local expert to do the repair for you. It will save you money, and at the end the gate will work again and will be safe for use.

Just like not every vehicle will be the right vehicle, so is the rolling gates in NYC. If you own a moving company, it will be ridiculous if you will purchase a minivan instead of a truck. SO is the gate. If you need a gate for a parking garage, which service many cars every day, it will be ridiculous if you will install a gate that meant to be installed at a storefront. Just the amount of times a day the gate will be used is enough to know that the gate will break soon.
The case study: We once provided a quote for a new rollup gate installation in the Bronx. We quoted the job for $3800 +Tax. Another company quoted the job for $2100. We explained to the client that it cannot be, but he insisted. We wished the client a lot of luck.
The problem was that the gate they offered for a parking lot in New York which contain more than 50 cars, and being used more than 100 times a day, is a gate that should be installed at a storefront. Ridiculous! Sometime people try to save money, but they do that at the wrong places. The gate the other company installed lasted for 3 months. During the 3 months they replaces 2 motors. At the end the client called us and asked us to do replace the gate. It was on 2012. The gate is still working with no issues. And all we do is maintain it once in a while.

Conclusion: A new track can cost like 5 minivans. But what 5 minivans cannot do, that track can.  When you invest at something, check not just the price, check what you get in return. Rolling gates is a general name for gates in New York City, but not every rolling gate can be the right gate. As we explained, the gate which will be the right gate for a storefront door in Queens, will not be the right gate for a busy parking lot. Use a rolling gate expert to help you make the right decision, and get a rolling gate that will work safely and smoothly for many years, as every gate Doctor Gate installed in New York does. Sometime in life the cheapest turn to be the most expensive, and the more expensive end as the best investment. And rolling gates in NYC are no different.

Doctor Gate of New York City is a company who specialize in garage doors, doors and gates of all kinds. We offer same day service for commercial and home overhead doors, as well as rolling gates. After more than 20 years of servicing doors and rollup gates near New York, we can say that no project will be too complicate for us. From commercial overhead doors, to home garage doors, to storefront rollup gates, get in touch with us, and we will be there today.

Our Roll Up Door Service in NYC include: